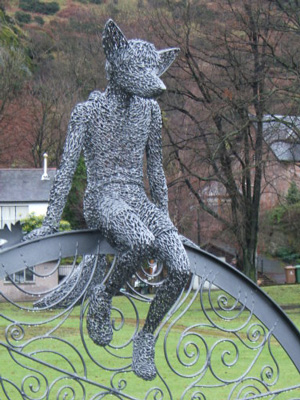 This public art work by internationally renowned sculptor Andy Scott, which features a boy with a fox's head sitting on a water wheel, was installed in Menstrie's Midtown Gardens in December 2008.

A number of Menstrie residents were closely involved in the design evolution of the sculpture.

The figure depicts both past and modern Menstrie life. The boy is dressed in current style complete with trainers and hoodie top, while the fox's head and tail come from two aspects of village life - there are foxes around us in the countryside, but it is also known that in days gone by children in the village kept foxes as pets.

Within the sculpture there is also a buzzard symbolising the pair who live in the woods, and under the boy's right hand a maple leaf, representing Menstrie's connection with Nova Scotia.

Andy Scott's Menstrie sculpture is the fourth to be commissioned by Clackmannanshire Council.

Other public art works by Andy Scott in Clackmannanshire