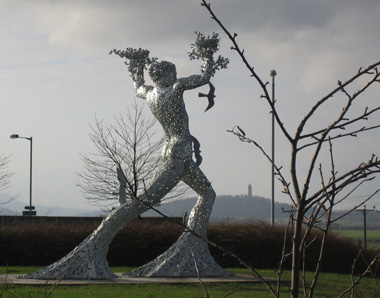 A second public artwork by sculptor Andy Scott was erected at Muirside roundabout in Tullibody in February 2008.

The sculpture of a striding man, which is still to be officially named, is a partner piece to 'River Spirit', which graces Collylands roundabout between Sauchie and Alva.

Children from St Serf's primary school in Tullibody visited Andy Scott's workshop and his assistant came to the school to work with the pupils. Many of Andy's projects comprise educational aspects and he has even incorporated creative input from schools and community groups.