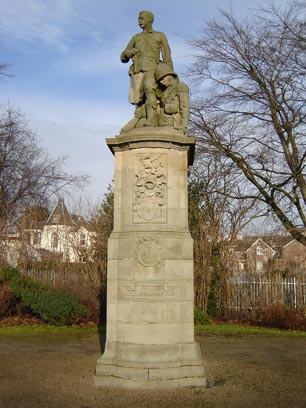 This site, which lies within the Alloa Glebe Conservation Area, is situated on the north side of the junction between Ludgate and Claremont and comprises a public open space with shrub margins, grassed areas and wide footpaths. The memorial, which is Category B listed, stands off centre towards the north of the site, centred on a circular hard standing with three radial footpaths extending out towards the north west, south and north east.

The memorial comprises an ashlar square stone pedestal with carved coat of arms and inscription on a convex south face. The remaining three upper pedestal faces have relief panels with moulded edges with the north facing panel containing a bronze plaque. There is a moulded pediment to the upper edge of the pedestal. The stone statue depicts a soldier of the Argyll & Southerland Highlanders standing protectively over a wounded comrade.

The Roll of Honour