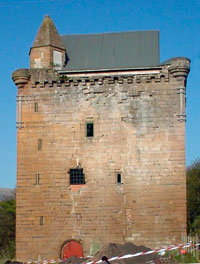 At the moment Sauchie Tower is only open for special guided tours during Scottish Archaeology Month and Doors Open Days each year in September.

Sauchie Tower was built between 1430 and 1440 by Sir James Schaw, who came from Greenock to marry Mary de Annand, co-heiress of Sauchie. James Schaw was ‘Comptroller to the King’, the Schaws were one of the most influential families in medieval Scotland and were governors of Stirling Castle until the reign of James IV. There may have been an earlier building on the site before the present tower was built, though no evidence for this has been found so far. Sauchie Tower is comparable to the secondary wing of nearby Clackmannan Tower and has been changed very little since it was built.

The tower is built of pink sandstone ashlar blocks, pinned with oyster shells. It measures 11.5m by 10.3m externally, with walls 1.6 - 2.0m thick, except for the west wall, which is over 3m thick and contains mural chambers on the first three levels. Externally the tower is very plain but internally it is much more elaborate, with ornate fireplaces, window recesses with bench seating, smaller rooms for family privacy and domestic comfort. There are now four storeys but the ground floor was once split into two levels and there were probably attic chambers in the roof.

The main entrance is at ground floor level in the west wall. A flagged path led into the entrance passage, which was fitted for both outer and inner doors. Access to all floors is gained from there into a circular, turnpike stair in the north-west corner. Opposite this is a small guard- or porter-chamber.

There is a well in the ground floor room, which may have been used as a store or animal shelter in its later history. There was a chamber at entresol level, then at first floor level is the main hall. It has a floor of sandstone flags and a large fireplace with a massive lintel and elaborately moulded jambs. In the west wall a very large recessed window with the remains of a grille leads to a private chamber which may have been wood-panelled. The floors at second and third storey levels have not survived, probably casualties of the fire which is thought to have gutted the tower in the 1750s.

The wall heads are quite intact, with a broad parapet walk with bartizans (small corner turrets) resting on four continuous corbel courses. Several courses of the outer wall of the parapet are, however, missing. At the top of the stairs is an unusual hexagonal cap-house with an intact pyramidal roof.

In 1529 Alexander Schaw was granted the hereditary post of Master of the King’s Wine-Cellar. The family was apparently allowed to use three covered golden cups on its coat of arms as a recognition of this honour. The post was reconfirmed on his grandson by James VI. Another Alexander Schaw became heir to the Sauchie estate in 1623 and was knighted in 1633 by Charles I during his tour of Scotland.

The tower was once enclosed by an inner courtyard wall, still visible to the north of the tower and c 25m to the west, protected by a ditch. There may also have been an outer courtyard wall.

The west courtyard wall, and perhaps part of a medieval west range, were re-used as the ground floor of a mansion house. Old Sauchie House appears to have been a fine laird’s house somewhat typical of the early 17th century, when tower houses had gone out of fashion. It was two storeys high, with a vaulted ground floor divided into three chambers. The main access to the first floor was via an external staircase in the centre of the east wall, with an elaborate entrance porch over the door.

There were three carved, pedimented dormers on each side of the house. The pediments on the east side were all elaborately carved with details which suggest that the house was created in 1631 by adapting and restoring an existing medieval structure. The person most likely to have done this and whose initials were carved over the entrance, was Alexander Schaw, soon to be knighted by Charles I.

The Sauchie estate passed to another branch of the Schaw family, who c1700 built the mansion of Schawpark, and then in 1752 by the marriage of a daughter, Marion Schaw, to the Cathcart family. Old Sauchie House was still occupied, probably by tenants, until it was demolished around 1930. Schawpark was sold to the earls of Mansfield in 1826 and was eventually demolished in 1961. Sauchie Tower is now the only survivor of the three residences of the Schaw family.

Evidence from excavations in and around Sauchie Tower suggests that it was still used until the mid-18th century, perhaps for occasional visits and parties. After the fire, the ground floor was probably used as a store, while during the later 18th and 19th centuries sheds were built around it, perhaps as animal shelters.