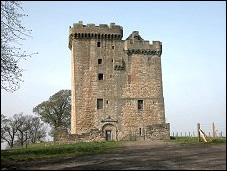 At the moment the tower is only open to visitors by special arrangement and occasionally during Scottish Archaeology Month and Doors Open Days in September.

A royal hunting lodge was mentioned as being here in the 13th century: this might well have been built of timber. The site belonged to the Bruce family from 1359 to 1796, having been sold to them by their kinsman David II.

The first tower was built c1365 as a two-storey house by a member of the Bruce family on the summit of King’s Seat Hill, an important strategic site overlooking the Forth valley and all the land around. The original entrance was at first floor level and was reached by an external staircase.

In the 15th century the building was raised to tower height and the taller, square south tower was constructed. This created an L-plan structure with a crenellated parapet or wall walk supported on machicolations (alternate holes in the stonework said to be useful for pouring nasty substances down onto attackers!)

A turnpike stair was inserted in the re-entrant angle and there was an entrance at ground level. Only the top of this stair survives, as the lower part was removed to allow the construction of a wider scale-and-platt stair to the first floor.

Both the basements are vaulted, as are the first floors. The hall on the first floor has a fine 16th century fireplace. On the third floor is a long narrow gallery entered through one of the window recesses.

A mansion with crowstep gables and turrets was built to the south-west of the tower in the late 16th century . It was gradually demolished in the early 19th century and nothing survives now. In the late 17th century a new entrance court, walled and protected by a moat, to the east, with a new doorway into the tower embellished with a decorated pediment, were all built.

The Bruce family went bankrupt in 1708 and Henry Bruce fought for the Jacobites in the 1745 uprising. His widow, Lady Catherine Bruce, lived in the mansion until her death in 1791, when the tower and house were abandoned. On 26th August 1787 she knighted Robert Burns with the sword of Robert Bruce. There are fragments of a courtyard wall and traces of a garden terrace and a bowling green.

Clackmannan Tower has been in the guardianship of what is now Historic Scotland since the 1950s, by which time subsidence due to mine workings had caused major structural collapse.

Historic Scotland has undertaken extensive repairs to preserve the tower and is committed to increasing public access within the next few years. The parapet walk has now been restored.