Alva Pool Handed Over to Community 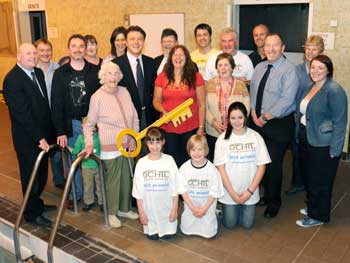 The official handover of the key from Clackmannanshire Council to the new owners of Ochil Leisure Centre took place on Tuesday, 10th July.

This was the first formal step of Ochil Leisure Enterprises taking ownership of the Ochil Leisure Centre, formerly the Alva Pool.

There will be many more steps on the way to the re-opening of the facility but this represents an important transition, as the swimming pool is now officially owned by OLE.

The formal hand over event took place at Ochil Leisure Centre on Tuesday evening when numerous members of the community turned out to watch Clackmannanshire Council Leader, Councillor Gary Womersley present the key to Douglas Skilling, acting chairman of OLE. Also present were Convenor of the Enterprise and Environment Committee, Councillor Donald Balsillie and Convenor of Education, Sport and Leisure, Councillor Ellen Forson.

A report had been tabled last November by Head of Facilities Management for Clackmannanshire Council, Stephen Crawford, presenting to Council an analysis of the Interim Business Plan submitted by Ochil Leisure Enterprises on 30th September 2011.

After a lengthy debate and an amendment by now Depute Provost, Councillor Donald Balsillie, seconded by now Council Leader, Councillor Gary Womersley, it was approved by Council.

Councillors recommended to transfer the Alva Pool complex and associated car park to Ochil Leisure Enterprises (OLE) for a sum of Ł1, along with a sum of not less than Ł100,000, which would cover demolition costs, to operate the Complex as a community facility for the benefit of the people of Alva and Clackmannanshire.

It was a condition of the transfer that in the event that the Complex is no longer required by OLE, the Complex would be re-transferred back to the Council.

Councillor Womersley handing over the key to Alva Pool to Mr Skilling, also presented Ł250,000 in funding from Clackmannanshire Council, to help get the project underway.

Afterwards Councillor Womersley said: "I would wish all the people in the community and the members of OLE the very best for the future. It has taken a lot of various processes to get to this stage, but I am sure with their commitment and dedication they will make the new Ochil Leisure Centre an excellent facility for the community."

In accepting the keys to the Pool, Mr Skilling said: "OLE took a significant step towards the re-opening of the Ochil Leisure Centre, which is the new name for the former Alva Academy sports complex.

"Having ownership of and access to the building will allow us to move ahead with the work we require to do to bring the complex up to an acceptable standard.

"We will be re-furbishing the swim change area; cleaning and painting in a number of other areas."

OLE was awarded a grant of Ł10,000 from "Awards for All" on 19th June, a grant will be used towards the cost of refurbishing the change facilities in the swimming pool at OLC.

Mr Skilling added: "There is still a lot of work to do get the necessary Health and Safety Certificates and Licences. We would like to thank the many people from Clackmannanshire and beyond for their support and patience. Our aim is to get Ochil Leisure Centre open just as soon as we possibly can."

When Alva Pool closed on 1st July, 2011, following a Special Council meeting on 10th February, 2011, previous users of the Pool were offered alternative accommodation in Council facilities, including the two main users, Alloa Swimming Club and Sports Development, who were moved to Tulliallan Swimming Pool. This represented 80 per cent of the users of the previous Alva Pool. Other users transferred to the Alloa Leisure Bowl.